I read Carl Icahn’s most recent letter about Apple with much interest. I admit I was at first shocked by his conclusion that Apple was worth $240 a share. If Apple goes over $200 in the coming year, I will be so rich I will actually be able to afford an iPhone 6… Plus!

Nevertheless, his letter opened my eyes on a few topics. For instance, he claims Apple’s tax rate should be 20%, well below the 26% that is reported, due to the special accounting Apple uses. He claims that Apple is already accounting for some of the tax for repatriating offshore money, a point I had very lightly studied before, but that actually makes a big difference in the long run. Indeed, if a company forever plans to reinvest its earnings, it faces a lower tax rate and Apple is not accounting for that situation, even though it applies to them.

In any event, I admin I was surprised by some of his decisions and assumptions. While his overall methodology is excellent, I respectfully disagree with him on several topics (Apple cars, for instance). With that in mind, Itook the liberty to fix some of the assumptions and hypothesises from his letter.

Here is a simple multiples approach to evaluating Apple, followed by a DCF (discounted cash flow) on net income evaluation.

There is no way, not even a one in a million, that iPhone revenues will only grow 2.3% in 2016. It’s just not possible. This basically means that the iPhone will barely grow at inflation’s pace, and even lower in some regions. With more and more stores opening world wide and with the mobile market still growing at a 10-15% rate, there is no way revenues will not grow by 5% at least in 2016 barring an absolute catastrophe. My own prediction would be a 10% growth yoy for both 2017 and 2016, and I consider that assumption conservative.

10 million Apple Watch in 2015 is incredibly conservative if you consider Apple sold 1M in its first week-end. The ASP seems fine on the other hand.

I personally forecast a 20-25M Apple Watch sales. The second model in Q3 2016 seems alright as well, but the watch becoming a “must have” doesn’t.

Apple Television Set – after many years of rumors as part of Apple’s push into television and as we referenced previously, we expect in FY 2016 Apple will sell 55” and 65” ultra high definition television sets.  We forecast revenues of $15 billion in FY 2016 and $37.5 billion in FY 2017 on 10 million and 25 million units respectively with average selling prices of $1,500.

No. Apple will not announce a new product until 2017 at the earliest, with release in 2018. There is no way Apple will announce a TV set in 2016. It’s just not possible. The Watch barely just came out and Apple wouldn’t launch another new product not even 12 months later.

A new product is not factored in any of our analysis and might surprise us to the upside (especially given the high R&D costs that we factor), but remains too uncertain to forecast and predict.

Interest Income – with regards to interest income, since we value the net cash separately from the business, we assume no interest income from Apple’s net cash of $149.7 billion on March 28, 2015.

This is silly, Icahn. Apple is not going to let that money sit in a bank account somewhere for little to no interest. Apple has its own company managing it, Braeburn Investments. I expect a 3% annual return on that investment, or around $4.5B in 2015 growing by around 10% per year (due to extra profits).

Effective Tax Rate – importantly for the company’s income tax rate, we consider 20% a more appropriate tax rate for the purposes of forecasting real earnings, not the 26% effective tax rate Apple uses in their income statement.  Most companies in the S&P 500 state that they plan to permanently reinvest their international earnings and therefore do not have to accrue for an income tax on unremitted earnings and thus show a lower tax rate.  Google is a good example of this, as its effective tax rate is 20%.  Apple, unlike Google and most companies in the S&P 500 has chosen to accrue income taxes on some of its unremitted international earnings and according has an effective tax rate of 26%.  Therefore, when assessing the multiple of earnings at which Apple should trade, we believe it is appropriate to use a 20% tax rate for Apple in order to make such comparisons Apples to Apples, no pun intended.

After analyzing your argument, I have decided to go with it and accept your assumption of a 20% tax rate. Also, I want to say the possibility of a tax holiday in 2017 or 2018 would more than justify this assumption.

Share Repurchases – we assume share repurchases of $37.5 billion, $31.25 billion, and $37.5 billion over the next three year for our forecast and not the more aggressive pace we hope the Board will undertake

In addition, I add the following hypothesis:

Based on that, we can “adjust” Carl Icahn’s estimations to arrive at the following numbers (in millions) 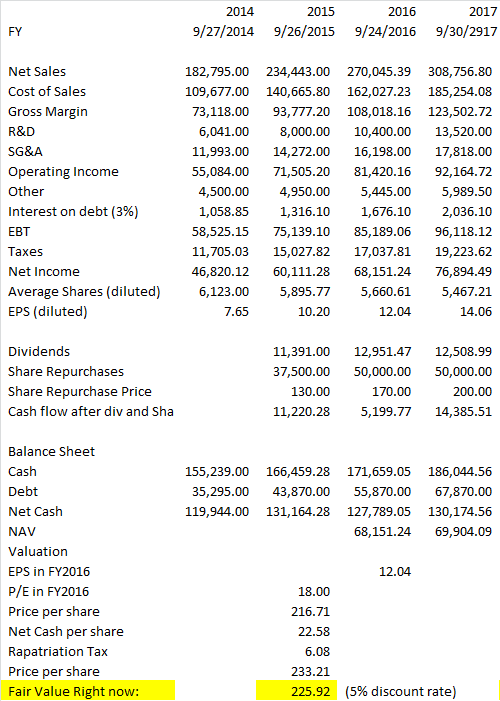 We now extrapolize Apple’s revenues, gross margin and other elements until 2022 and use a 10% WACC to discount future cash flows. We do not factors dividends as a return for the investor and elaborate our fair value using net income.

Also, starting in 2015, we assume a 2% perpetual growth in net income.

We thus obtain (for the later years): 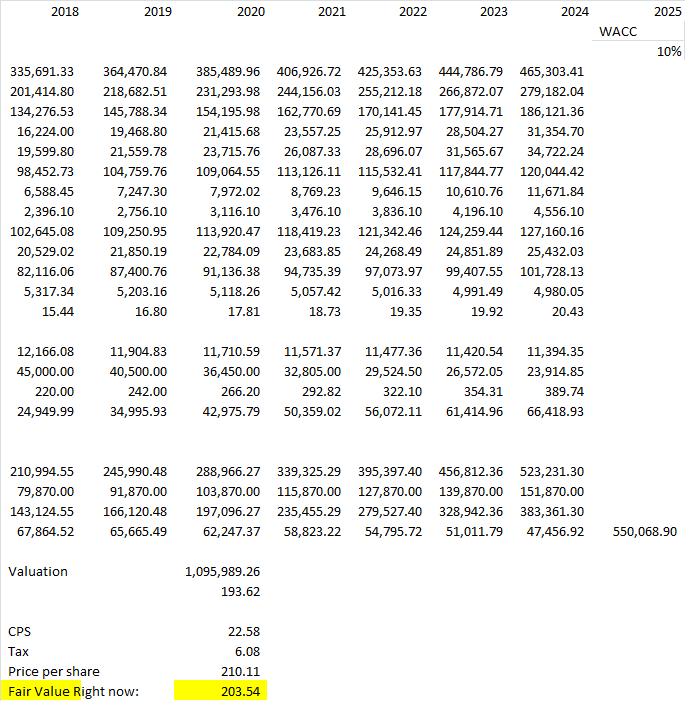 Three Canadian Companies that belong in every portfolio
Gofundme, or how to profit from others’ misery

2 Responses to A simple multiples and DCF evaluation of Apple