When I look back at my past, I realize just how many opportunities I completely missed. I would honestly lose sleep over it if I didn’t already have difficulties falling asleep. By far my biggest miss is “NFLX,” which I passed in 2010, closely followed by La-Z-Boy (from $0.60 to $30 in 5 years, really. For a sofa-making company that has been listed on the stock market for 40+ years, nothing less. Really.) and then Starbucks.

I will humbly confess, I completely missed the boat - or rather the bucks, I suppose. The starbucks. 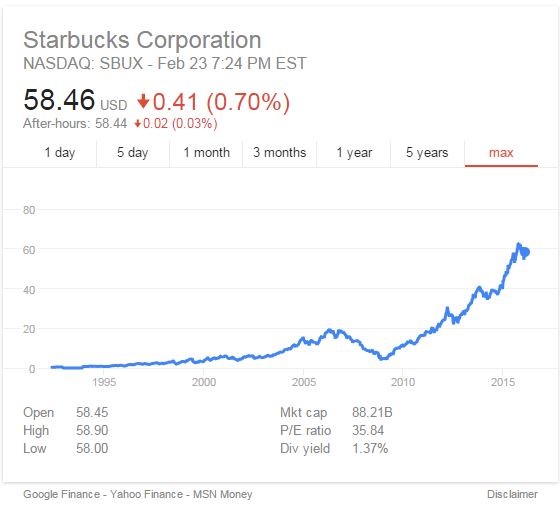 Sure, it was the financial crisis, but one has to wonder just how vulnerable a coffee chain is to a slowing economy. A temporarily and somewhat-contained slowdown, by the way: I would gamble that at least 50%+ of Americans didn’t see any difference at all during the financial crisis. For me in Canada, the crisis had little effect: nobody I know of lost their job or had any specific financial problem.

In any event, I think anyone can agree that the drop from $20 to $4 during the financial crisis - 80%, nothing less - was way overdone. I spent a few hours looking at their 2008 annual report, where the sky was supposedly falling (SBUX was then valued at only $6B), and here’s what I found:

Sales were up - they were up quite nicely, in fact - stores open were up, revenues were up and while the growth had slowed from 20% or so to 10%, the chain was doing quite well. So why did the stock crash over 80%? With 16,680 stores open, each store was valued at $375,000. This doesn’t even pay for the land to build the store on, let alone the building, the equipment, the inventory, the training and so on (today, each store is valued at roughly $3.3M, as a comparison).

So, what happened? Maybe the chain was losing money? Well, no:

It was obvious that people sold NYSE:SBUX due to panic. It literally makes zero sense to sell such a company that has literally zero chance whatsoever to go bankrupt. Already in 2008, Starbucks was a dominating player and pretty much everywhere. The hard data shown above shows the company was doing fairly well by almost any standard and exceptionally well by financial crisis standards.

Adding back the $267M pretax restructuring charges, SBUX earnings would have been around $500M. This means the company was trading at a P/E of 12, even considering deflated financial crisis sales. MCD, as a comparison, currently trades at a P/E of 24; CMG at a P/E of 35.

But but but people were about to stop buying expensive stuff!

No they were not. The financial crisis in general was massively over-hyped and over-promoted, but if there is one thing that I would bet on, it’s non-cyclical businesses such as SBUX. This is even ignoring the fact SBUX is diverfisied worldwide and the fact the economy was eventually going to rebound (which it did). In other words, even if Americans were to reduce their purchases at SBUX, they would restart as soon as the economy improved. Betting against SBUX - again, already a massive player in 2008, its store count only increased 50% since then - is like betting against Microsoft in 2001.

I simply fail to see why Starbucks’ stock dropped so low. Perhaps there was an argument for it to drop 50%, like the general market, but certainly no more than that. It is far less vulnerable to a slowing economy or a financial crisis than most companies; in fact, it is not related to the financial crisis in any way or shape, yet fell far more than the general market.

Why did I miss it?

I simply don’t remember SBUX trading for such a small price. Sure, there were stock splits since then, but the fact remains that SBUX was way, way, WAY undervalued. Compare it to McDonald’s which didn’t go down, but up during the financial crisis, and  you have a formula that makes zero sense.

I remember where I was in 2008. SBUX wasn’t even on my radar at that time. I bought AAPL instead and, well, I did just fine, I guess, but it’s hard for me to believe such a behemoth was basically once considered “worthless” by investors.

What about today? Is SBUX still a good investment? Well, it’s a pretty standard 10%+ return per year. It’s probably close to fairly valued right now - if anything, it’s probably slightly overvalued, which wouldn’t place it amongst my top picks. It’s still a solid pick and if you have a 10 years horizon, it will be very difficult for you to earn under 10% per year from SBUX.

One Response to Do you remember when SBUX used to trade at $4.00 8 years ago? Me neither.