I have been dazzled by DWTI’s apparent invulnerabillity to time decay ever since I’ve started trading it. Since it’s a triple leveraged ETF product (meaning it seeks to go up 3% for every 1% ), it HAS to go down on average. In other words, this product should slowly see its value erode through time. Yet, DWTI seems to hold strangely weird over time: 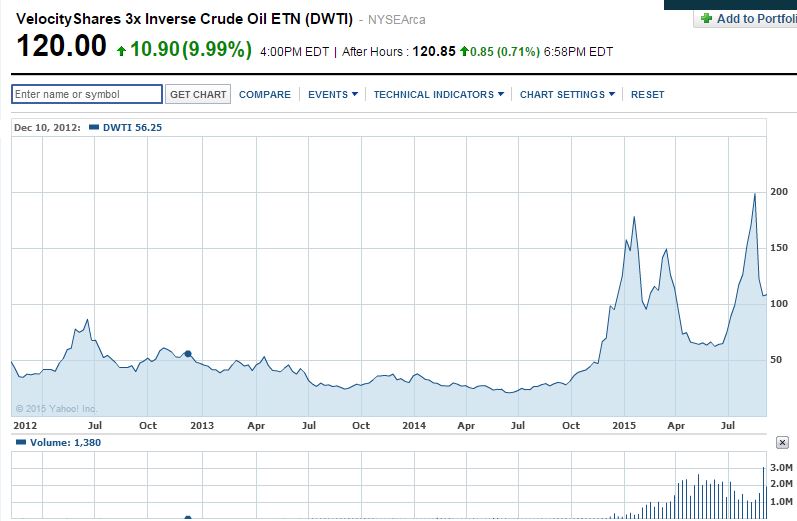 To study what decay DWTI had, and whether it was worth trying to benefit from it, I did a graphical analysis of DWTI vs WTI based on every close price from March 9th, 2012, to August 31th, 2015. Here are the results:

Again, the decay seems almost absent, at least from this graph. Over such a period, I would have expected DWTI to lose pretty much 50-60% (or more!) to decay, yet it seems to track WTI moves (amplified by a factor of 3 as this is a triple leveraged product) pretty well. If that was correct (i.e. no time decay), then buying both UWTI and DWTI would basically be a way to print “free money” as someone could basically buy both and just wait, with any variation in the underlying yielding strong profits.

This little segment of DWTI’s prospectus had a few ideas:

So, what gives? To figure out the answer, I calculated DWTI daily returns over the same period, dividend them by three and took the negative value of it (as DWTI is bearish and, thus, moves in the opposite direction). Here are the result:

The table is as folllow:

We also come to the following conclusions:

Based on those elements and the multiplicative error, we estimate DWTI’s decay - only from its errors in tracking its objective - to be roughly 0.03% daily, or 7.83% annually. However, this period was marked by a quickly crashing WTI and it is probable the decay is higher (much, much higher) than calculated.

Calculated decay from the realized move over the period, the annual decay is 10.39%.

I was wrong. Technical Analysis is God’s Gift to Humanity
The secret to make money from stocks? Illegal Insider trading.