This is going to be the most obvious post I ever made. In fact, this article took me a while to write just because I consider it’s so obvious it shouldn’t even need an explanation.

Apple reports its earnings on April 27th, after market closes. It’s set to obliterate earnings estimate again. However, that is not the only or even the main reason you should bet on Apple stock rising.

You should bet on Apple massively rising because it’s going to announce:

And because the stock will rise massively as a result.

Let’s start with the obvious: Apple’s stock is still way too low. I mean, it’s almost pissing me off at this point. I am starting to feel Apple will never reach the valuations it really should be trading at (that is, $170-180 a share minimum).

Let’s start with the cash mount Apple has:

As of last quarter, this is basically Apple’s cash. Please note that it actually excludes the following elements:

On the other end, Apple’s total liabilities stand at $138.47 B, which includes (ultra-low yields) bonds it recently sold the pay for the dividend and the share buyback. Overall, this amount is around $20B higher than its assets without the long term investment. Sure, some assets will keep depreciating (such as furniture and buildings), but short terms investments should provide a return higher than zero (and some assets, such as land, will appreciate in price).

Now, let’s go back at “Long Term Investments.” This portion of Apple’s cash, which is basically cash it won’t ever truly need because it’s making so much money (more on that later), is managed by its subsiduary, Braeburn Capital. Nobody knows exactly what “Braeburn Capital” is or does. For those of you who don’t know what Braeburn Capital is:

In 2006, as Apple’s bank accounts and stock price were rising, company executives came here to Reno and established a subsidiary named Braeburn Capital to manage and invest the company’s cash. Braeburn is a variety of apple that is simultaneously sweet and tart.

Today, Braeburn’s offices are down a narrow hallway inside a bland building that sits across from an abandoned restaurant. Inside, there are posters of candy-colored iPods and a large Apple insignia, as well as a handful of desks and computer terminals.

In any event, as we can see from the graph, despite the massive buyback and newly-implemented dividend, the long term assets have somehow found a way to keep growing. This is important becayse Apple’s latest share buyback program is simply massive:

As of the end of 2014 Apple had paid out $27 billion in dividends and bought back $73 billion in shares.

That’s $100B just handed out to shareholders like that. Free. Well, not technically free, but you get what I mean: it’s $100B that vanishes from Apple’s coffer. Currently, Apple gives shareholders $10 B a year in dividends.

And despite all that, Apple’s “Long-Term Investments” are growing at an insane speed. In fact, in 2014, Apple’s “long-term investments” grew by $27.36 B (wtf?). Again, keep in mind this isn’t from apple selling bonds and taking on debts since that money went to buy back shares and pay a dividend. In fact, the $32B or so Apple sold in bonds so far doesn’t even cover the $100B they spent in the shareholder program.

All this to say, Apple has an insane amount of money and can you really say you see an end to it? I don’t. I see Apple’s cash reserve growing year after year, quarter after quarter. This money is YOUR money, shareholder. Currently, nearly 20% of AAPL’s market value is cash! In other words, Apple could pay a $25 per share special dividend and it wouldn’t even affect their business!

b) Less and less shares

I feel like nobody on public forums gets share buybacks. Let us first look at the number of shares outstanding:

From its top, Apple bought back almost a billion shares. You read that right: it bought back and destroyed nearly 1,000,000,000 shares. And I thought my position in Apple was big! It self-destructed roughly 14.6% of itself in - hold on tight - 19 months. There are currently less shares right now than 8 fucking years ago!

Even if you hate Apple, you must admit it’s impressive. And that was three months ago. Apple bought back even more shares since. And it’s about to announce a bigger buyback (ok, I’ll hold myself a little here).

Buying back shares usually has a VERY bullish effect on shares. Keep in mind that, typically, a buyback will be 5-10% of outstanding shares. Apple is at 14.6% and, in my mind, they are nowhere near stopping (see: point 3).

Here’s the part that makes no sense.

Based on the information above, you’d except Apple to be “at best” a stagnating company, stuck to grow at inflation pace or even slower. At worse, you’d expect Apple to be a dying company about to become obsole…

It literally took me five minutes to write the last sentence because it was just too funny:

Oh yeah, and what domain is Apple in? Technology, of course, a field that is still growing at insane speeds. The mobile phone market alone is expected to grow 10-20% per year for the next 5 years. If Apple only grows at that pace - which it doesn’t, it grows much faster than the average mobile phone company - we have a company whose revenues will increase 10-20% per year by basically doing nothing new.

Apple is growing so fast in China that I’m not even going to write about it. Instead, I will let this picture do the talking: 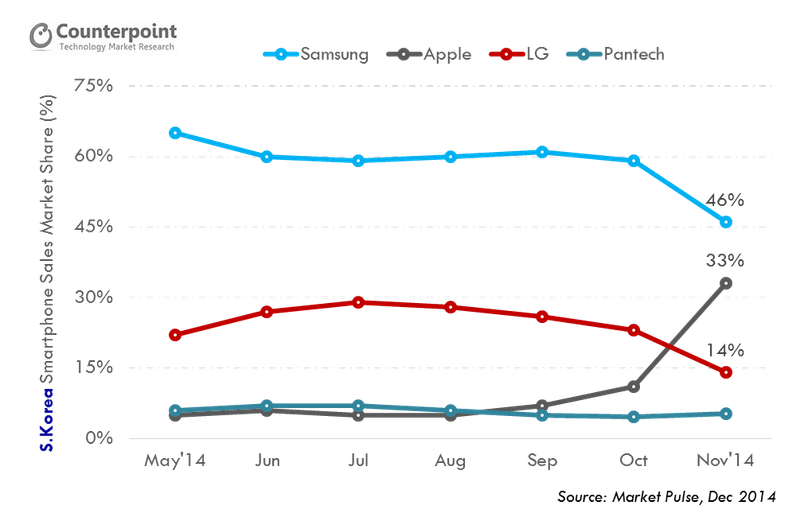 GG NO RE Samsung

So how do you think iPhone sales fared in JAN-FEB-MAR 2015?

The Apple Watch is a genius product. Oh, it won’t count in Q2’s revenues, but I still expect positive news to drive the share price up. Remember that the first watches will be delivered on 4/24. I fully expect a big “hype” around the event, a hype that is already waxing on social websites.

Is it really a surprised that the new macs are set to define the next generation of portable computers? Or that Apple Pay will bring money to Apple every time someone pays with it? Or that iTunes is breaking record after record?

I mean, I almost feel like not discussing it at this point because it just seems so obvious. When Apple will reach $200 a share, people will say, “Why didn’t I invest in them when they were at $125?” and they will feel quite stupid. They will invent some bullshit reason, “Oh the Watch could have failed and the share could have fallen to $50 a share,” a statement that would have at least a iota of credibility if Apple wasn’t critically undervalued.

Seriously, enough with that. Apple is unstoppable right now. It’s right there with Disney, Alibaba and Gilead and it’s not going anywhere.

The iPhone will set yet another record (for the quarter). While analysts currently expect 53-58M, my own personal estimate is 61M iphones (range 59M-64M, I am being a little conservative here for once). This contrast with last year’ sales of 43.7M, a massive increase of nearly 40% in sales. To compare, last quarter sales were an increase of 46% yoy.

I base my estimates on the following:

iPad should decline yoy, given mostly by the fact people are buying iPhones and not iPad. Specifically, iPhone6+ will eat into the iPad mini’s sales, up until Apple can come with a solution to rekindle iPad’s popularity. Sales should be flat and/or slightly decreasing until then.

Also, everyone’s attention was on the Watch during last quarter, not on the iPad. People are likely to keep their money to buy a watch; i.e. if I had $700 to spend right now, I’d buy a watch and not an iPad because the Apple Watch is what’s cool right now.

If all that wasn’t enough, now into the real reason you should play Apple’s earnings:

Buy Apple ahead of earnings. My own personal, high-risk product is AAPL 15 MAY 2015 calls @$130 strike, but for more safety, go for September (sell your calls after earnings).

The stock should kick up 5-6% post-earnings and then keep rising in the week that follows. Sell your options on Friday, May 1st, hopefully for a nice gain!