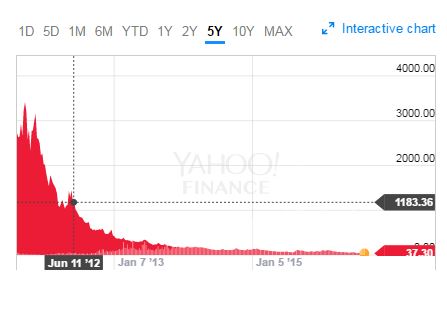 For the past 5 years or so, I’ve been shorting VXX. I short more everytime it spikes, which is not that often.

The graph above is not lying, by the way: VXX really is down from 2,723.20 to 37.30. It’s a average minus 57% return per year in case you can’t or don’t know how to calculate. It’s up to a point where it’s almost not worth it to buy stocks anymore. Look at the one year performance: 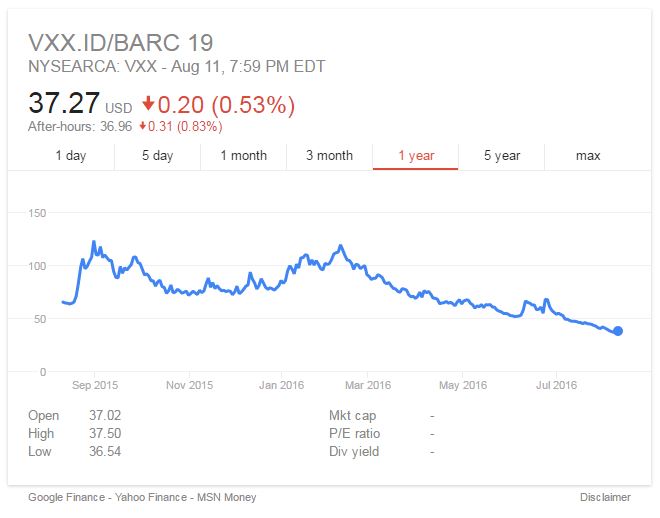 Down 51% year over year, with the VIX (implied volatility) staying about the same.

Because VXX is a garbage product: it’s basically designed to go down. In simple words: VXX loses 5% of its value every month. Every. Month. If you need a clearer picture, imagine a huge reservoir holding a lot of water and imagine someone shot a rocket and made a huge hole in it: that’s basically the story of VXX.

Nobody should ever buy it, but someone, some people, somewhere, for some reason, invest in it.

“I am buying a product that loses 50% per year! I must be some kind of genius!”

The picture I am about to show you is one of finance’s unresolved mysteries:

Big banks holding a product losing 50% of its value per year - brilliant. At least now we know what caused the financial crisis. I can’t believe Barclays is holding $237M of a product that is basically worthless. One might mention some kind of hedge against volatility, but there are far better, more viable ways to protect yourself against volatility. And of all the people who should know that, big banks ought to be near the top.

I’ve made a fortune shorting VXX over the years. I wait for a tick up, then I short. Even if the volatility remains high, VXX is sure to go down because it crashes every month anyway. Sure, it doubles up from time to time, and if you short at the wrong moment, it sucks for a while, but otherwise, it’s just free money. Unless there’s a next major crisis, by shorting VXX, you are getting an easy 5% average decay per month. And the borrowing fees are next to nothing to - something like 2% per year since the product is easy to short. For some reason many big players (as shown above) like to hold it.

Shorting VXX is like printing free money. My advice: short a constant amount of dollar every month (i.e. shorting $1,000 worth of VXX every month or so).

By the way, VXX recently did a 1:4 reverse split because it became a single-digit stock. If you were shorting 1,000 VXX, you are now shorting 250 VXX. And it’s still going down in flames. Hell, “in flames” might be putting it lightly.

The three best little-known Canadian REITs you should buy today
I don’t get why so many people love Riocan REIT (TSE:REI.UN)

11 Responses to Shorting VXX is literally like printing free money