If you don’t know what “The 4 Hour Body” is, it’s the latest entry in the current eat simple/go simple/ be simple/everything is simple fad. Or maybe there’s been something new in the mean time, I don’t know, I don’t follow this. I’m not linking to it because it’s a bunch of garbage. Here it is: 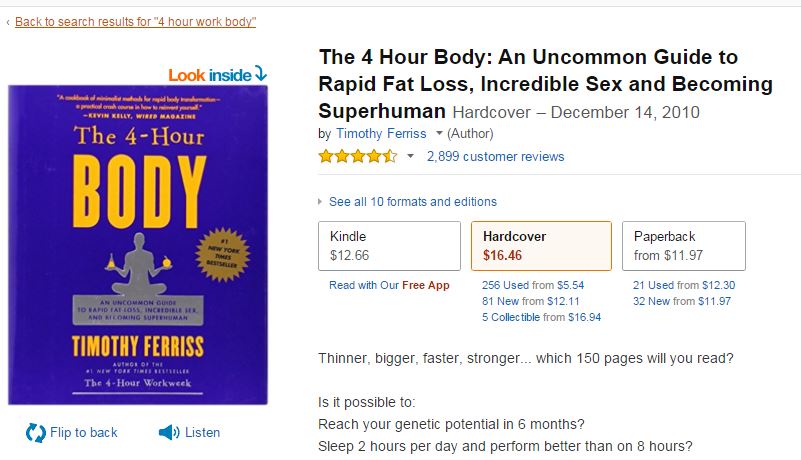 You know those quacks back in the day who sold some kind of weird potion that was supposed to cure everything? Yeah, well, this book is the printed version it.

I’m not ashamed to admit that I had never read it until someone gifted it to me, and by that, I mean “getting rid of a copy he made mistakenly bought.” I started reading the book with an open mind, but the bullshit crept on me on the very first page. Look:

Yeah, right. The book was published in 2010, meaning it was probably completed in 2008 or 2009, but let’s assume this includes the year 2010 and let’s round to a nice 6 years. That’s 1,000 blood test in 312 weeks, or a little over 3 a week - far over the “as every two weeks” you claim. For a self-proclaimed expert in nutrition, sexology, psychology, dieting, exercicing, self-healing, business, sleep and probably crystals, you sure are terrible at maths.

I’m surprised that not more people have denounced this book for the utter stupidity and vapidity of it. For a book that is supposedly a best-seller, it is surprisingly worthless. To be honest, even after reading it, I’m not sure what this book is supposed to be. But after going through what I’m going to refer to as some “extremely weird chapters” (including a diagram on how to insert your penis in a vagina, nothing less), I have to assume the book was written as a joke or perhaps a challenge. “Hey look, I’ll place as many conjectures, hearsay, anecdotical evidence and broscience as I can - and it will become a best-seller!”

Looking at the paragraph above, we can just see how little sense it makes. Even if there was a point “importing stem cell growth factors” from Israel (is that even possible?), it still wouldn’t prove anything because a) there are millions of factors at play in our body b) everyone is different. What works for a person might not work for another simply because every person is different. This is why when they test new medication, they test on a wide range of people with different backgrounds, ethnicities, jobs and habits.

There isn’t much more for me to comment on. It’s all random guessing and claims that make no sense. For instance, this man pretends you can “cure” some long-lasting injury with a couple of bullshit supplements. He even goes so far as to recommend “bloodletting”:

What is this based on? No clue. I did some research and this is the best I found:

But the idea boils down to this: The less blood that’s available, the harder it is for the bacterium to scrounge up enough heme to thrive.

“Bloodletting in the preantibiotic era may have been an effective mechanism for starving bacterial pathogens of iron and slowing bacterial growth,” writes Rouault.

The author basically takes one study that states “bloodletting is better than nothing when you don’t have antibiotics” and starts pretending it helps prevent cancer and death. I’m shocked that such drivel can be published. Take this for instance:

You know how we call this? Anecdotical evidence. The author then goes in a long diatribe about some kind of massage in a manner redolent of the chiropractic scams that pervaded society just a few decades ago. He brings acupuncture, of course, and at this point, I was seriously expecting a chapter on crystal healing.

Looking back at this story, I have to say this: big pharmas spend billions to establish what we call “double-blind trials.” There is a reason for it, Frank.

But perhaps up to point, you could consider this ouvrage to be pure entertainment. Only a fool would take a self-help book as something actually serious, right? Well, the book goes too far right here and there:

It is not okay to give medical advice in such a book, author. And I like how he covered his ass, taking examples he can easily backtrack from. For instance, Type 2 diabetes is sometimes curable, but in 99% of cases, certainly not in 48 hours. I guess he took that one guy who can actually do it.

Honestly, at this point, I could basically quote the entire book because if you read the paragraph above, you have a pretty good idea of what the entire book is about. The only thing missing was a discussion on “vibrations” and “being in harmony with the universe.” He’s keeping that for book two, perhaps.

I’m not even going to discuss the very bizarre diet recommended in the book which is another of those keto/gluten-free/fat-free/high-protein scam. He goes on pretending that fruits are the antechrist and that you should never touch them. He doesn’t really give a reason for it other than some vague guess about “carbs” and how “you should eat bacon instead” or basically something like that, he just says to avoid fruit. And milk

Almost everything in this “book” has been debunked several times by credible sources and actual studies. Take this for instance:

The studies invariably show this to be false. For instance:

Most of the book is exactly like that. Just guesses, hearsay and advice that is unscientific. The author suffers either from severe delusions or an extreme case of confirmation bias. When you actually recommend something that goes against established evidence “just because,” you have a problem. The rest of the book is just even more promotion (most of it paid, I would guess) for even more books, supplements and “workshops” from his friends. Literally every chapter is followed by at least 10 links to drive traffic so gullible idiots will waste even more and money. Of all the references, I think this one is the best:

I’m shocked to see this kind of crap actually ends up being published. I’m even more shocked that people actually buy this garbage. You could ask a monkey to press random keys and you’d get a book more coherent than this. 4.5 stars review my ass.

Do not buy Four Hour Body.

Fuck you too, SAQ
Economics: A complete waste of time